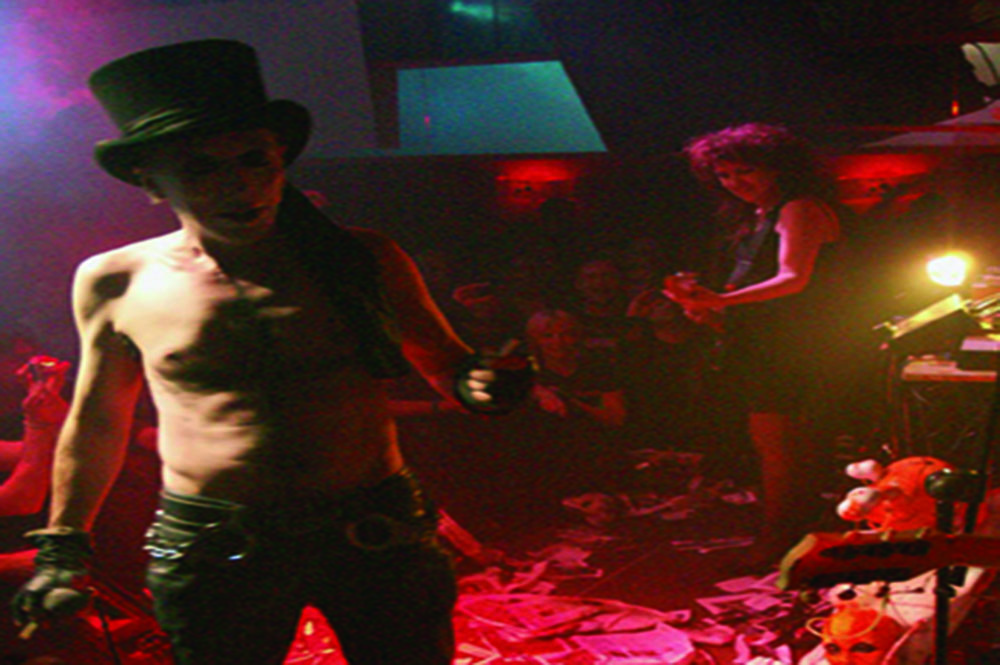 Darwin would have been proud of Alien Sex Fiend, a highly successful musical organism that has resisted 25 years' worth of attempts at pigeonholing and issued 13 barrier-breaking studio albums in the process. Continually cited for this brazen shedding of norms, the beautifully bizarre duo of Nik Fiend and Mrs. Fiend - aided by an ever-shifting squad of henchmen - have yet to stand still in any zone of space and time.

What is new in Fiendland? Something has been brewing in the fiendish caustic cauldron, and new compilation sampler CD "Para-Abnormal" is IT. Forging forward from where Anagram Records' retrospective "The Best Of Alien Sex Fiend" collection concludes, the 2006 release of "Para-Abnormal" celebrates the terrorific ten year anniversary of the band's own 13th Para-Abnormal CDMoon Records label. It is ripe with the unavailable, the unreleased, and most importantly, the unexpected! Offering 10 tormented tracks spanning all singles and albums issued since the label's fiendish foundation in 1996, ASF - true to their ever-unconventional form - substitute a number of cuts with formerly unreleased treasures from their vault. For instance "Baby" from the "Information Overload" album is represented by the original bare bones demo and the previously unheard "Hellfire Dub Mix" of "On A Mission" replaces the "Nocturnal Emissions" version. Thus "Para-Abnormal" presents an alternative overview of the band's more recent output and serves as a tempting taster of what Alien Sex Fiend have achieved over this past decade.

Like H.R. Giger's facehugger-to-adult Alien metamorphosis in that fabled film, Alien Sex Fiend '06 aren't a different band than say, the '97 incarnation, or the Fiends of '94 or '84. They are simply a more advanced form of the very same, very special beastie, genetically modified for the times.

Mrs FiendFor those in need of further mental refreshment, let us backtrack to the genesis of ASF in the deep, dank mists of 1982. Paranormal pulsations began to emanate from the environs of North London - a strange and unholy grafting together of percolating synth rhythms and a ghoulish, theatric aesthetic. Primed by Nik Fiend's phantasmagoric vocals, Mrs Fiend's highly original use of trippy drum machines and inscrutable electronic gear became a trademark - often imitated, never duplicated.

Alien Sex Fiend brought attention to the notorious Batcave club in London and its subsequent scene, though the band soon progressed beyond the genre's boundaries. This formative period was later documented on "The Legendary Batcave Tapes" album. Their classic 1983 debut single, the Youth (Killing Joke)-produced "Ignore The Machine" and its accompanying album, "Who's Been Sleeping In My Brain?", captured the Fiends initial burst of psychotic energy. Riveting lysergic follow up "Acid Bath" moved further into strange and spine tingling song structures, and led into the bleaker, more brooding interludes of 1985's "Maximum Security." With 1986 experimental monsterpiece "It -The Album," Alien Sex Fiend scaled unearthly peaks of creativity and/or insanity, followed by a pair of 1987 gems - "The Impossible Mission Mini LP" and the hallucinogenic "Here Cum Germs" album - and era-defining singles compilation "All Our Yesterdays". In an atomic renaissance of Fiendish style, 1988's "Another Planet" charted a new course of luscious lunacy, merrily continued on 1990's chaotic "Curse" and 1992's mysterioso menagerie "Open Head Surgery."

Throughout this eerie ouvre, Alien Sex Fiend built a fanatical following for their enthrallingly garish gigs, enticing the likes of Iggy Pop and David Bowie into fervent Fiend fandom, and opening for Alice Cooper on his Nightmare Returns jaunt. Live, the ASF experience is a creature-feature cabaret with Munsterian magician Nik as ringleader, armed with his array of lethal props, and surrounded by utterly gonzo self-designed stage sets. Their tyrannical tours have been documented on four merciless live albums to date: "Liquid Head In Tokyo" (1985), epic double set "Too Much Acid?" (1989), "The Altered States Of America" (1993), and the latest, wildest "Flashbacks! (Live 1995-98)" (2001).