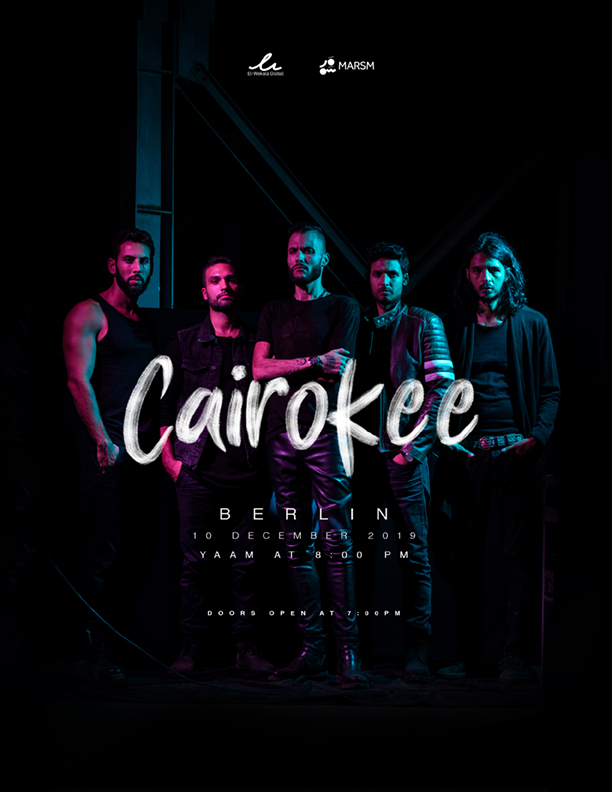 1) History and Background
Cairokee first started by the name “The Black Star “performing their favorite covers in both English & Arabic at various gigs around the country. It wasn’t until later till they decided on the name “Cairokee”; inspired by both the words Cairo and karaoke, and mixing up the two words, meaning the band is singing along with Cairo. The band was later officially formed in 2003, and is currently consisting of Amir Eid (vocals & rhythm guitar), Tamer Hashem (drums), Sherif Hawary (Lead guitar), Adam El-Alfy (bass guitar) and Sherif Mostafa (Keyboard). Cairokee’s sound evolved tremendously from one album to the next, reflecting their goals and continuous ambition to sing along with Cairo, which is a fast paced and ever evolving City.

The idea of writing their lyrics, playing music and performing live for local and global audiences (all before the age of 30) was a dream come true for all the band members who have always been childhood friends. Their first major hit was “Sout El Horeya” which has over millions of views on YouTube and was ranked a world record as one of the most watched videos in the shortest period of time. Soon after their success, came “Matloob Zaeem, “Ethbat Makanak” and more hits followed. In a digitally ruled world, Cairokee have always managed to come on top with massive smash hits such as “Yal Midan” featuring Aida ElAyoubi, pushing the song to the number one most video in the history of Facebook and eventually lead the album “Matloob Zaeem” to top the Egyptian charts for months. Their second album “Wana Maa Nafsy Aaed” followed in the big steps on “Matloob Zaeem” back in 2012, in addition to single mega hits such as “Ehna El Shaab” written by the legendary Abd El Rahman El Abnoudy. In 2014, Cairokee released “ El Sekka Shemal”, carving a new benchmark in their long road of success featuring collaborations with Souad Massi and the legendary Ahmed Fouad Negm. In 2017, the band released their 5th  album “A Drop of White “, which is the most successful album of theirs to date. With this album the band was able to reach the top of the chart with 8 tracks on the top 10 iTune chart, becoming the best selling band in the Middle East.

In conclusion, Since 2003 Cairokee is a trend-setting Egyptian band that is currently the biggest band in the Middle East with more than 10 million social media followers and the highest number of sold out concerts locally and internationally. Winners of the Middle East Music Award (MEMA) in 2013 (www.memawards.com) and nominee of the MTV EMA award in 2014, Cairokee is a band with countless successes and an uprising career towards stardom with cemented credibility & success. An icon brand in Egypt and a topliner in the region.

Sherif El Hawary (Lead guitarist)
Sherif Hatem El-Hawary, aka Hawary, is one of the founders of Cairokee. Hawary discovered his passion for music at a young age while watching a movie called “Amadeus” – he watched the movie over a hundred times and ever since then,  he figured music is what he wanted to get into. He started by learning to sing and mastered the art of playing the guitar. Hawary grew up listening to Rock music and was always inspired by Pink Floyd’s guitarist “David Gilmore”. Hawary is famous for his guitar solos and live performances. Hawary’s favorite artists are “Tom Waits, Leonard Cohen and Nick Cave”.

Sherif Mostafa (Keyboard & Backing vocals)
Sherif is the youngest and latest member to join Cairokee, starting in 2008. At the time, Cairokee have been on the hunt for a new keyboard talent so we went along and auditioned… needless to say, Sherif Mostafa was the best talent amongst all. It all started with Sherif at a very young age as his parents owned a piano and he spent his time continuously playing and experimenting on their piano before getting a real mentor. He grew up listening to different genres of music like classic, pop and rock, but at an older age, he found himself mostly drawn to Rock music.

Tamer Hashem (Drums)
Tamer is also one of the founders of Cairokee. He has been with Cairokee from the very beginning in addition to being Amir’s childhood friend.  Tamer was a drum player at school so he decided to excel his skills by becoming the core drummer for Cairokee whilst also managing the band. Tamer’s strongest asset would be his ability to listen to different genres of music and enjoy them all. He listens to jazz, pop, R&B, oriental and house, so he is always open to different kinds of music and ideas. Tamer’s favorite band is Pink Floyd and one of his favorite artists is the French singer and performer, Zaz.

Amir Eid (Lead Singer & Song writer)
Amir grew up listening to bands like Metallica & Guns N’ Roses. He was always fascinated by the idea of a rock band. Amir, Hawary and Tamer would always hang out and one day they decided to start a band – ironically, before they were even professional coached. At that time, Hawary decided to leave the singing to Amir and focus on playing the guitar, and Amir discovered his talent in writing songs. Amir is mostly influenced by Bob Dylan and his favorite band is Pink Floyd.

Adam El-Alfy (Bass Guitar)
Adam was there from the beginning when forming Cairokee, as he’s always been a close friend of Amir, Tamer and Hawary. After forming the band, Adam travelled to Australia where he studied and learned to play both the guitar and saxophone. When Adam returned to Egypt, he joined the band as a saxophonist while pursuing a corporate life however the band faced a dilemma when their bassist left during 2007.  Adam decided to rejoin Cairokee as the bass guitarist. His favorite genres are Rock and Reggae. Adam’s favorite bands are Pink Floyd, The Beatles, and Cold Play and his favorite artist is Bob Marley.