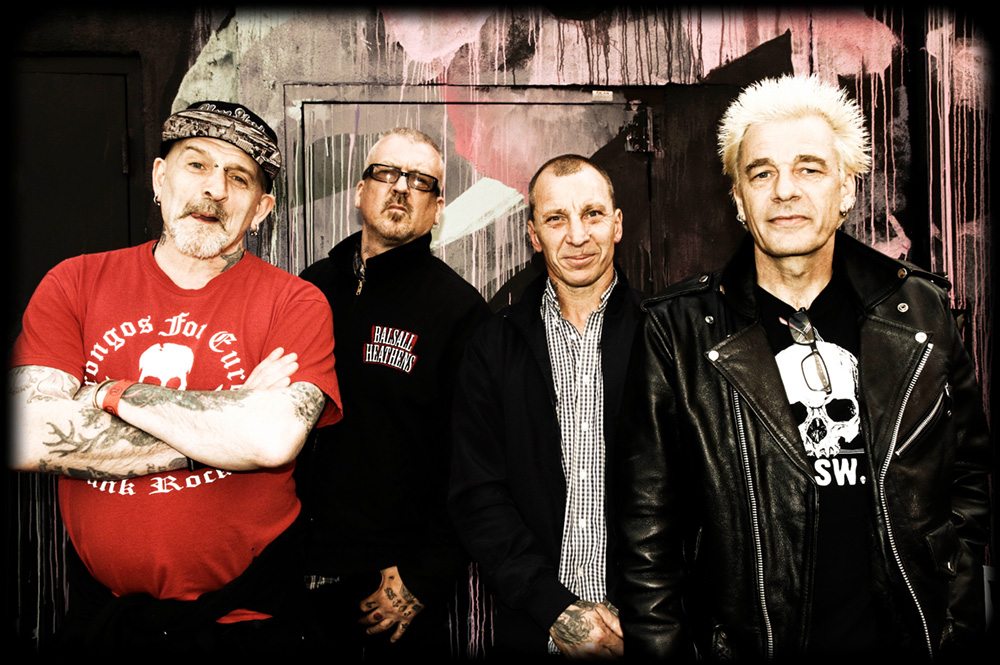 Momentum (Hellcat Records, release November 2017) is the new album by punk stalwarts GBH.  Why would a band that has been a constant on the scene for over 35 years choose that title over any others?   “We’re always looking forward,” says Colin Abrahall (vocals), “next gig, next tour, next album.  For us, it’s all about momentum.  At this point if we stopped moving forward we’d just fall over”.

Classic GBH humor, dark and self-deprecating, but also illuminating – GBH have never slowed down, traveling the globe and regularly topping 100 shows a year.  According to Colin “We play out so much it maybe gets in the way of our writing and recording but we’re constantly at it, constantly picking up new things from our travels and the people we meet”.  The results show on Momentum, as GBH continue to develop their sound within the hardcore framework that fans know and love.  “I’ve always been into classic rock n’ roll,” says Jock (guitar), “bands like Thin Lizzy and Status Quo.  I’ve always sneaked bits in here and there but there are a couple of moments on this one where I’m a little more open about it”.

The results can be heard on songs like “Blue Sky Thinking” with its anthemic opening and swaggering riff resolving in a classic street punk chorus. “That one’s one of our favorites”, Colin confirms, “it’s one we’re going to be playing on our upcoming US tour alongside ‘Birmingham Smiles’ and ‘Momentum’.  We’re doing ‘Liquid Paradise’ during sound check so that’ll probably work it’s way in at some point as well”.

Momentum was recorded at Muther’s Studio in GBH’s hometown of Birmingham, England.  Colin explains: “It’s comfortable.  We used to practice there.  It got dilapidated but now it’s been fixed up into a proper studio.”  “And it’s got a proper bar!” Jock laughs.  “We laid down all kinds of takes on the songs,” Colin continues, “which made the mixing interesting as we’d send it all off to Michael (Rosen – Engineer) and him and Lars (Fredericksen – Rancid) would send back tracks.  You’d think something was maybe a glitch or whatever and it’d come back and we’d listen and think ‘that’s fucking amazing’!”

How does GBH balance new songs with the classic repertoire that fans expect to hear?  “We like to think all our songs become classic eventually”, Jock deadpans.  “At first people are a little hesitant,” Colin adds, “they come out and want to go crazy and we open with something they haven’t heard before.  But they’re listening and pretty soon it’s all the same.  Like ‘Unique’ (from 2010’s “Perfume and Piss”).  At first it got the same reaction but now everybody knows it and sings along just like it were something we’d put out on Clay (Records).  Hard to imagine it not being in the set!”