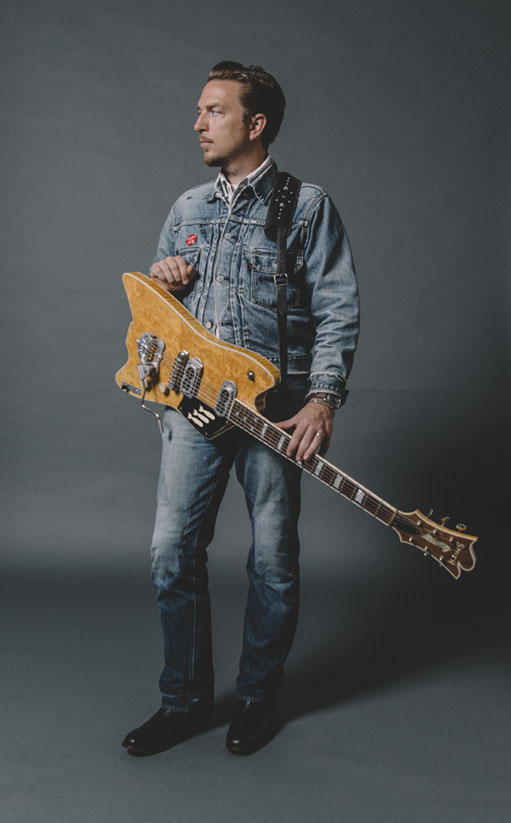 MCPHERSON TO APPEAR ON CONAN OCTOBER 25

JD McPherson’s Undivided Heart & Soul is out now on New West Records and available on vinyl, compact disc, and digital format HERE. Co-produced by McPherson and Dan Molad (Lucius, Here We Go Magic) and recorded at the Historic RCA Studio B in Nashville, TN, Undivided Heart & Soul is McPherson’s first studio album in nearly three years and follows his critically acclaimed Let The Good Times Roll (2015). The highly anticipated new album released October 6, 2017 and debuted on Billboard’s Top 200 chart – reaching #1 for Top New Artist Albums and Americana/Folk Albums, as well as #4 for Top Independent Overall Albums, #5 for LP/Vinyl Albums, #27 for Top Current Albums, and #44 for Overall Digital. Mojo Magazine praises, “...McPherson’s horizon has never sounded so open,” and the Associated Press exclaims, “JD McPherson’s ‘Undivided Heart & Soul’ deserves your undivided attention.” American Songwriter calls it “...McPherson’s third and best set to date” in a 4 out of 5 Star review, while Paste Magazine awards it an 8.1 out of 10 rating and notes, “...McPherson takes a slightly different approach, leaning harder on the first syllable of rockabilly.” Mother Jones adds, “JD McPherson has long been one of the more inventive artists with deep blues roots, thanks to a strong, expressive voice suited to a variety of genres and songs that tamper with familiar templates in subtly intriguing ways. On the exhilarating Undivided Heart & Soul, McPherson makes this implied versatility explicit, expanding his sonic palette to exciting effect...If the colorful pop tinges initially seem like a dramatic departure, McPherson never loses the greasy intensity that made him so compelling in the first place.” In celebration of the release, McPherson will appear on Conan next Wednesday, October 25; and he is currently on an extensive North American tour, which includes dates with support from Nikki Lane and Nicole Atkins. Please see below for full tour details.

In advance of the release, Garden & Gun premiered Undivided Heart & Soul in its entirety, calling the album “Sensational,” HERE. Additionally, Rolling Stone Country premiered “Crying’s Just A Thing That You Do,” HERE, calling it a “Jerry Lee Lewis-in-the-key-of T. Rex rocker” and “some fearless and flawless rock & roll.” Of the record, they go on to add, “From the pure, jittery rock & roll of ‘Crying's Just a Thing That You Do’ to some more personal, sentimental moments, Undivided Heart & Soul is a record that sounds full of vital urgency because it was never once dialed in. Rather, it takes true effort to make something effortless.” NPR Music also previously premiered the video for the album’s first single, “Lucky Penny,” calling McPherson a "supreme rock reinventor" and stating, "There's a certain fugitive feel to the sound [of] Undivided Heart & Soul – McPherson's mastery of rock and soul fundamentals is beyond question, but his voice moves in wild ways on these songs, and the band exudes a new kind of risky energy. JD McPherson has said the process of making this album pushed him hard. That's a good thing; he's crossing some new lines on the highway." Directed by George Salisbury (Flaming Lips, Nathaniel Rateliff), the video depicts McPherson and his band performing the song at RCA Studio B in Nashville, TN and can be seen HERE. The legendary studio was fundamental to the creation of the "Nashville Sound,” and its influence on the creation of Undivided Heart & Soul was insurmountable as well. The ghosts of some of the greatest songs in history live within its walls: Elvis Presley’s “Are You Lonesome Tonight?” and Dolly Parton’s “I Will Always Love You," among them. Since the facility is a working museum by day and offers public tours, the entirety of McPherson’s workspace during recording had to be reset at night: Loading in all equipment in the late afternoon after the final tour was completed and working through the night.

The resulting, soul-baring album is a snapshot of McPherson’s creative process bringing the record to life, a journey filled with fear and change, then boldness, and, eventually catharsis. Undivided Heart & Soul features collaborations with Parker Millsap, Butch Walker, and Aaron Lee Tasjan. In addition to his longtime band members Doug Corcoran on guitar, Raynier Jacob Jacildo on keys, Jimmy Sutton on bass, and Jason Smay on drums, the album also features guest appearances by Jack Lawrence (The Raconteurs, Greenhornes), Jess Wolfe & Holly Laessig of Lucius, and Nicole Atkins. Prior to writing and recording the new album, McPherson moved his family from their longtime home of Broken Arrow, Oklahoma to the burgeoning artist community of East Nashville, TN, which gave him the opportunity to collaborate with this eclectic array of artists. The move had a profound influence on his new work, and McPherson began to experiment, exploring personal themes and injecting more of himself into his songs (including a co-write on the album with his wife Mandy). Opening up his process was no easy task. “I was having nightmares every night, thinking, ‘Wow, they’re going to hate this.” With a group of songs taking shape, McPherson and crew scheduled studio time to begin work on the album. After initial tracking began, it quickly became apparent that the sessions were not going to work, bringing his momentum to a halt. At the invitation of his friend and longtime supporter Josh Homme of Queens of the Stone Age, who was also recording at the time, McPherson, Homme, and his Queens bandmate Dean Fertita jammed together over a weekend in Los Angeles. They played around with some songs, with Homme pushing McPherson outside of his comfort zone in a no-stakes environment. McPherson calls the getaway “the most fun I’ve had since I was 15 years old” and returned to Nashville with a clear head, internal filters successfully stifled, and ready to move forward with a new co-producer in Dan Molad.

During the album closer, “Let’s Get Out Of Here While We’re Young,” McPherson sputters “We’ve worn out all the songs we’ve sung.” This is not a statement McPherson takes lightly. “This record was difficult for me to make, difficult to write, difficult to record. It took a lot for me to say that I can’t force these songs to be the way people are expecting.” McPherson says. Undivided Heart & Soul is statement record, one that asserts McPherson as he is now, battle-weary but stronger than ever.

2. Crying’s Just A Thing You Do

10. Under The Spell of City Lights