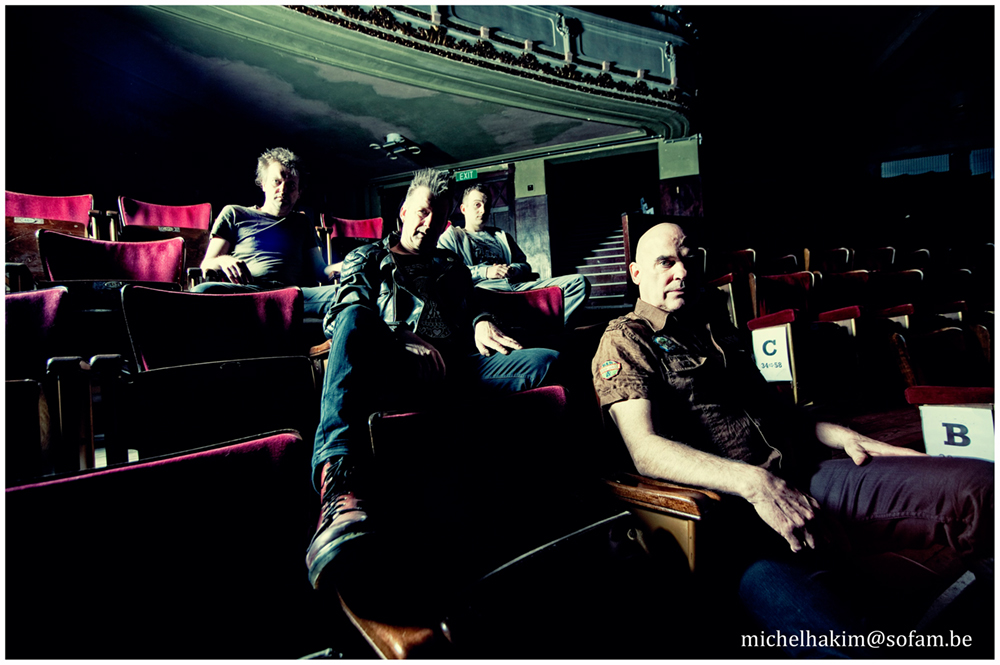 One of the first groups in Belgium to really tap into the power of the international punk scene which was erupting in 1976-77 were The Kids. In retrospect, it is a bit foolish to call the Kids a "punk"-group, since they were much too R&B for that, but they certainly communicated the "punk"-feeling.

Front-man Ludo Mariman in "Wit-lof from Belgium": "In 1976 we were together in a band called "Crash". None of us could really play. We just hammered away, hard and fast, sounding like a really bad Velvet Underground. When the first news of the punk explosion in Britain started to come through, I went to London. I wanted to know what was going on over there, and if these guys had the seem feelings of anger I had. I remember the shivers down my spine seeing Eddie & The Hot Rods. I also saw the Ramones and then I knew we had that same music within us. Technically we could handle it, because you don't have to master the instruments to play punk music".

"Bloody Belgium",  "Fascist cops", "No Monarchy" and "Rock over Belgium" were the songs which got them started.

Formed by three angry dock(work)ers, the group evolves from pure energy on the first album to more varied and adult songs. Ludo Mariman (again in "Wit-lof from Belgium") on the changes the band went trough : "Look, punk may be dead and over. But that doesn't mean we have to go away. We are almost a normal rock band now. We even have a slow song. We play better. We don't spit on the public anymore, now we try to amuse them".

Strangely enough, their two first albums were produced by Leo Caerts, the man who had been a band-leader for the likes of Will Tura etc. and the author of the world hit "Eviva España" (see Samantha).

In 1979 they release a single together with Jo Lemaire & Flouze : Jo sings "Tintarella di Luna", the Kids do a cover of "Louie Louie".

The album "Living in the 20th century" becomes a classic. They even hit the hitparades with "Dancing".

Their moment of fame however is the brilliant song "There will be no next time" (or as Humo put it : "the world hit which never was one").

After the split of the group in 1985, the front-singer of the band Ludo Mariman, a former professional soccer-player for Antwerp, keeps trying to make it in the music business. He sings "Angie" for the LSP-band and returns to the public eye four years later with "You never know what's yours" and has kept on recording ever since. Although his records are always of  reasonable quality, he never really manages to produce the excitement which was a trademark for The Kids.

That Mariman is a well-respected artist can be deduced from this expert for the 1994 album "They say" in Humo : "Mariman is, just as when he invented the punk movement for the low countries 18 years ago, still angry and that is a quality of this man. ... Most of the twelve songs on this album were written and sung from the viewpoint of something that somebody who has a much smoother tongue than me has described as the "wet dog syndrome". ... Authenticity. You cannot buy it in your local shopping mall. Ludo Mariman has had tons of it for years, and now he has even produced a very good cd with it."

1996 sees a surprise comeback for the Kids. They decide to reform the band and tour the summerfestivals. In 1998 they are featured on the soundtrack of the Belgian movie "Dief". They also reappear on national television (on "Nieuwe Maandag"). Ludo Mariman says the group now has a status where it can decide to play together once in while. They will also continue to tour in the summer of 1998.

This tour lasted well into 1999. During this they found out that they are doing to their own amazement - well eh - amazingly well in Eastern Germany. "There is a lot of demand for punks of the first generation over there. The sadder the surroundings, the better punkrock thrives", said singer Ludo Mariman in "Het Nieuwsblad".