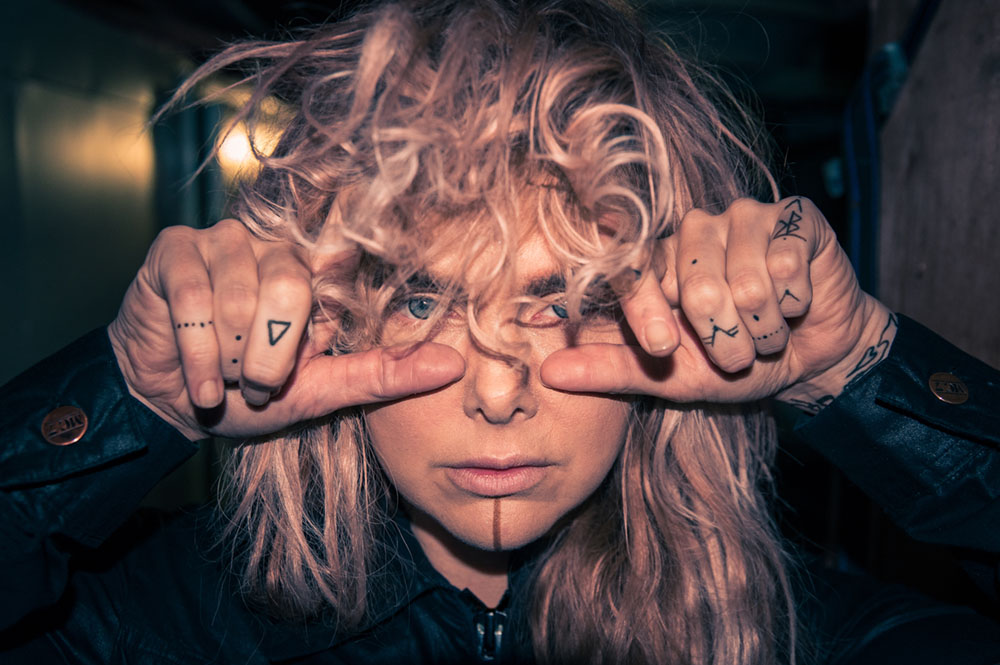 “Into the darkest city, we walk alone…”

Sunshine bores the daylights out of True Moon. For it is what we do in the shadows that defines us. The Malmo quartet’s self-titled debut album, set for a March release on Lövely Records, is a map of the darkness within us all, an unforgiving, unflinching examination of lust and desire, rejection and betrayal, solitude and alienation, death and re-birth… all the important stuff.

“Karolina and I are bored with the Swedish music scene at the moment,” states Tift baldly. “It feels like everyone has the same blueprint, like there’s an industry rulebook now for how bands must sound. We wanted to do something different. With the last Vånna Inget record (2013’s acclaimed, Swedish Grammy-nomated Ingen Botten) we got more and more in to dark wave and new wave so we felt that we wanted to explore that more.”

For inspiration, Tift and Engdahl looked to the UK, and the fecund, experimental and challenging post-punk scene of the late ‘70s and early ‘80s.

“We were listening to artists such as Joy Division, Killing Joke, Siouxsie and the Banshees, Sisters of Mercy, The Mission and early Cure,” the guitarist reveals. “There is a purity and honesty and integrity to that music that’s missing from the current scene. Those bands weren’t making music to be pop stars or rock stars, it is pure expression and pure art, and that’s the aesthetic we were pursuing.”

Recorded by producer Jari Haapalainen (Ed Harcourt, The (International) Noise Conspiracy) live to analogue tape at Tift’s own Studio Motion facility, True Moon is a snapshot of a band acting on instinct, looking deep within themselves to create art that is as beautiful as it is bleak, by turns haunting and harrowing, desolate and desperate, violent and alluring. Astonishingly, Engdahl completed all her vocals for the album in just 90 minutes, and there’s an energy and vitality to the one-take recordings which lends True Moon a striking urgency and tension.

“We wanted an old school, raw, unpolished feel to the production,” Tift explains. “When you listen to the Joy Division records, Martin Hannet’s production is totally integral to how the songs come across: if you hear a Joy Division song on the radio or in a club it only takes one second to recognise who it is because that studio sound is so distinctive. We wanted that kind of immediacy and impact.”

The result is a compelling, atmospheric and idiosyncratic debut, proudly out of step with current trends, and showcasing True Moon as one of Northern Europe’s most intriguing new guitar bands. From the cold-blooded, driving dark-wave of Voodoo (“I put on my wolf suit… Time to say goodbye to you”) through to the stark, sensual and dangerously seductive Honey (“Hey you, honey, I want to kill time with you…”), it’s an invitation, or more accurately, a dare to walk on the margins, a passport to a pitch-black, enchanting netherworld where convention and constraints have long been cast aside. Having brought their dark magic to London for the first time in December, True Moon – completed by drummer Fredrik Orevad and guitarist Linus Segerstedt - are now looking to cast their spell internationally in 2017.

“Karolina and I have played in Vånna Inget for five years, and I feel like we’ve achieved what we set out to do with that band, so we’re taking a break after our Japanese tour in March, and True Moon will be our main focus,” says Tift. “We want to embrace new challenges with this band, take on new territories and see new people. Ultimately, I hope this band will inspire people to take more chances with the music they make, but first we want to draw our own cult of believers together and create a little chaos of our own.”