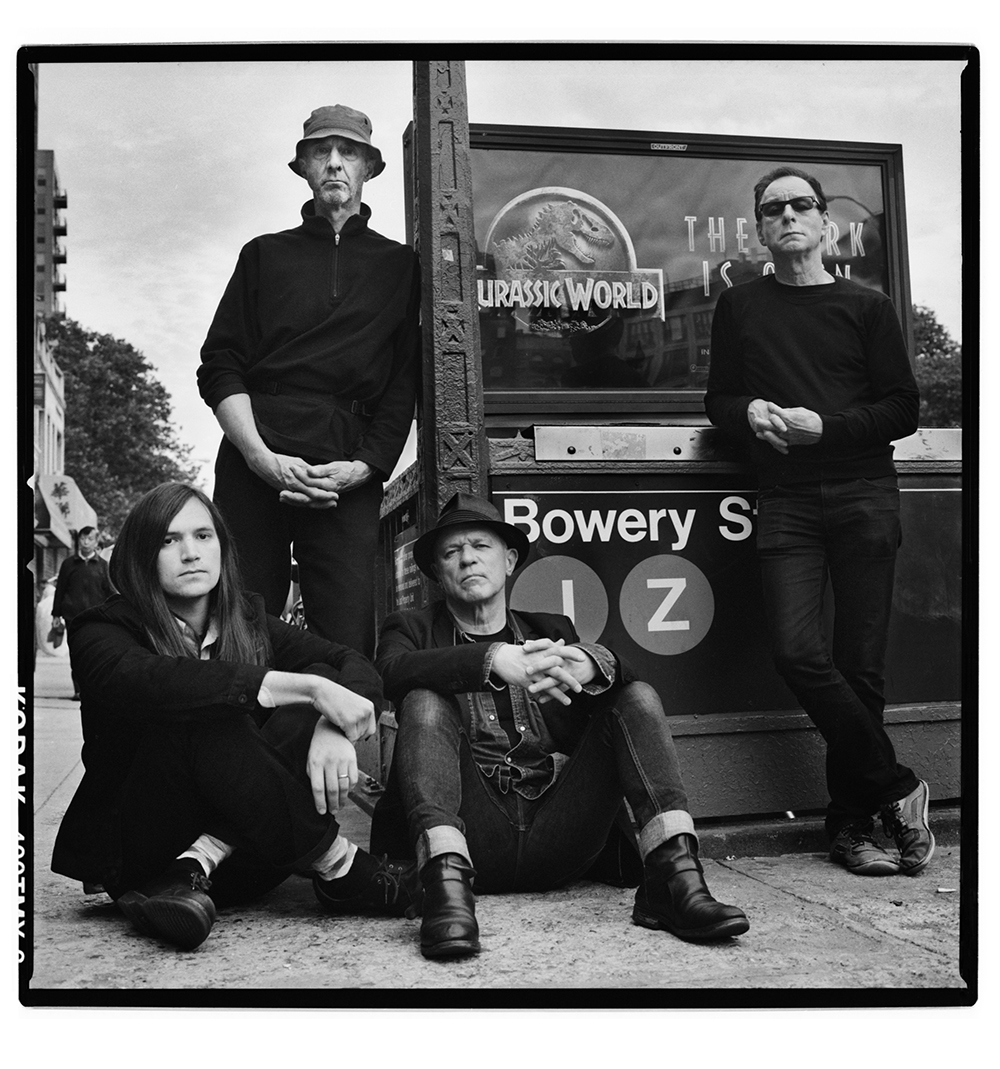 They may have arrived at the same time as punk and drawn on its initial burst of energy, but Wire’s forward-looking attitude meant they always stood apart from it. In fact, Wire could easily lay claim to having been the very first post-punk band. And yet, it’s equally true to say they could be viewed as part of the British tradition of left-field art-school bands that includes Roxy Music and The Pink Floyd.

Wire played their debut proper at London’s Roxy Club on 1 April, 1977. The band were immediately picked up by prodigious EMI offshoot label Harvest, and their debut album Pink Flag was released in December of the same year. The album was a collection of 21 songs, many of them sharp, abrasive and extremely short – six didn’t even make the one-minute mark. Yet many tracks, such as ‘12XU’ and ‘Ex-Lion Tamer’, are now rightly regarded as classics.
Pink Flag received near universal acclaim and would be cited as a major influence on a panoramic range of artists, including Big Black, My Bloody Valentine, Blur, Henry Rollins, Joy Division and R.E.M.

Many bands would have considered their sound minted, but by Wire’s second album, Chairs Missing – which featured gorgeous single ‘Outdoor Miner’ – they had already moved on. The band now included synths and keyboards in the mix, and began to further explore the possibilities of the studio.

Less than two years after the release of their debut, Wire’s third album, 154, broke further new ground, showing a band as engaged with the psychedelic guitar pop of ‘Map Ref. 41ºN 93ºW’ as they were with the moody soundscapes of ‘Indirect Enquiries’. As the NME review of the time so acutely observed, “154 makes 99% of the opposition look feeble in comparison”.

Following 154, the band and EMI parted company. Wire planned a series of concerts to showcase the increasingly wide-ranging set of compositions that would have made up the band’s fourth album. Yet these were not orthodox rock shows. Wire presented the songs with performance art interventions, some of which had a decidedly confrontational slant. The shows left audiences divided and potential labels unsure of what they might be signing. Although there was no formal decision to split up, by the end of 1980, Wire ceased operations.

1985–1991
When Wire returned as a live entity, it wasn’t with the aim of exploiting former glories. In fact, their decision to play only new material and eschew their back catalogue took many by surprise. But, as ever, Wire were only interested in moving forwards.

The reactivated unit found a natural home with Mute Records. The first fruit of this relationship was 1985’s Snakedrill EP. This was a Wire retooled for the digital age: the same intensity and mystery, but with a different kind of gloss.
The band followed Snakedrill up with The Ideal Copy. The album was recorded at the legendary Hansa Studios in Berlin, and found Wire extending their experiments with sequencers and new compositional approaches; there was an increased emphasis on the studio itself as an instrument.

Further albums for Mute followed. 1988’s A Bell Is A Cup… Until It Is Struckdisplayed a summery motorik and boasted unforgettable pop single ‘Kidney Bingos’. The next album took a curious swerve: It’s Beginning To And Back Again collected live recordings and heavily reworked them in the studio.
Manscape followed, moving the band into territory where the electric and the electronic were more closely interwoven. Next, The Drill took the unusual step of presenting eight different interpretations of one song. Feeling there was no place for him in this new Wire, Grey decided to depart. Newman, Gilbert and Lewis truncated the band’s name to Wir and released The First Letter, a set of songs that developed the compositional approaches of Manscape.
After this detour, Wire again ceased operations.

2000–2016
When all four members of Wire reconvened, it was initially as a purely live entity. Yet, ever the contrarians, they sidestepped expectations by presenting sets cherry-picked from every era of the band’s development.
However, the first Wire album of the 21st century was a far more forward-looking affair. 2003’s Send took the urgency and impact of their 1977 debut and retooled it via the production techniques of techno. These songs were armour-plated and delivered with lethal intensity. The release was supported by blistering performances, which proved the band were still a serious proposition in the live arena. Wire had judged the moment perfectly, as Send received widespread critical approval and rode high on numerous end-of-year lists.

Yet, despite the acclaim with which Send was received, Wire refused to cover the same ground again. Following the departure of Bruce Gilbert, the three-piece band began to evolve away from the stark monochromatics of Send. The resulting Object 47 was a transitional album, which nonetheless proved Wire were developing a more nuanced soundworld. In retrospect, however, it was with 2011’s Red Barked Tree that 21st century Wire really hit their stride. This was an album that showed a band in command of a rich musical vocabulary.
But, just in case things were in danger of settling into any kind of pattern, Wire’s next album was another diversion into the unexpected. For Change Becomes Us, the band returned to material amassed for their projected fourth studio album – songs last heard live in 1980, accompanied by bizarre performance art interventions.

In typical Wire fashion, the material was seriously reworked and the resulting album proved to be something of a classic. Another key factor was guitarist Matthew Simms, who’d played live with Wire since 2010. Now, he became fully integrated into the band, contributing to recording and composition.
Next came the crackling, vibrant sound of 2015’s Wire (“It’s all really well turned, potent and crisp.” – The Guardian) and 2016’s luminous yet punchy mini-album Nocturnal Koreans (“It's a cracker and sounds defiantly modern.” – The Quietus). Live, Wire continued to gain a reputation for being one of the most psychedelic of post-punk bands – and certainly the loudest.

2017
Having hit a peak of inventiveness and productivity, Wire have been playing strings of sold-out shows and achieving career-best album sales, as well as being cited as a strong influence by yet another generation of bands, including Parquet Courts and Savages.
Wire’s latest album is Silver/Lead, a set of songs which encompasses the optimistic dazzle of ‘Diamonds In Cups’, the menacing widescreen grandeur of ‘Playing Harp For The Fishes’ and the breakneck-paced guitar pop of ‘Short Elevated Period’.
Although their 15th studio album is being released on the 40th anniversary of Wire’s debut, Silver/Lead has nothing to do with the past and everything to do with the future.