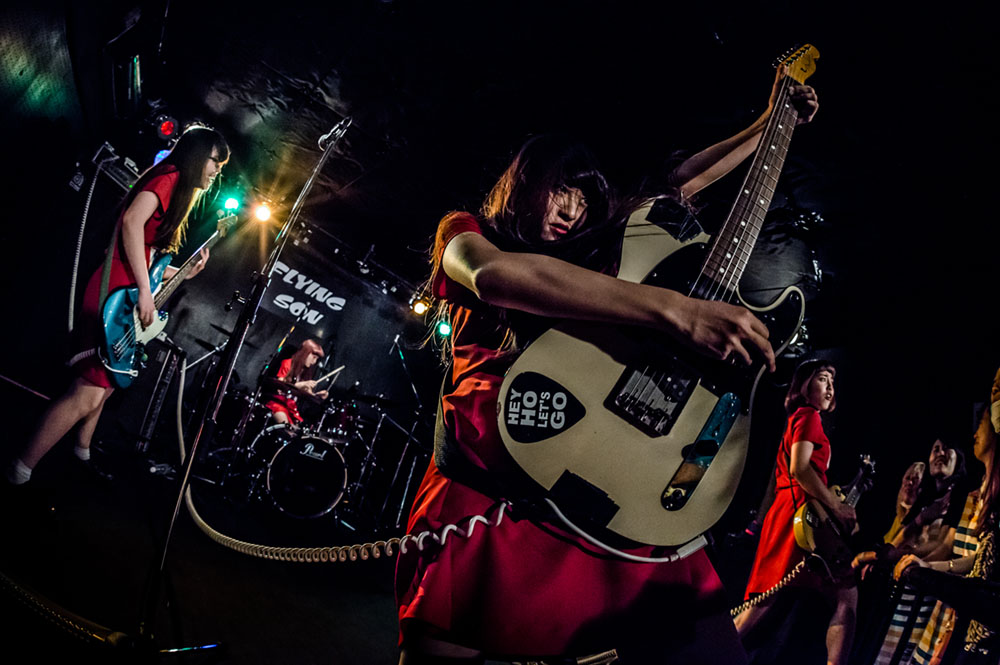 The Tomboys are a young 4-piece girl band from Kobe, Japan that take classic rock sensibilities and style and mash them up with modern-day pop music in a delightfully-sweet powerpop s'more that is taking Japan by storm!

In 2011, a group of 8th grade girls formed a cover band called NoName to play songs by such artists as The 50 Kaitenz and SCANDAL. The next year they played in a cover band battle hosted by SCANDAL themselves. They totally killed it, and drummer Non took home the RINA prize!

After that brilliant performance, the girls went to study abroad for a year (and managed to gain 40 kilos between the four of them).

In 2013 they came back to Japan as 11th graders (and immediately went on a diet). They resumed their musical activities, dipping their toes into songwriting for the first time.

That November, all (some) of their dreams came true and they released their first record. That same winter, they once again battled opponents from all corners of the globe in the SCANDAL cover band contest, this time taking home the special judge’s prize for best band and as a bonus guitar-vocalist Tabata Hina snagged the HARUNA prize as well!

In 2014, after leaving a seriously big impression on the staff and management of the live venue Varit in Kobe, they were tapped to open for Apple Saitou & the Happy Hercules Boys, Droog, and Katayama Breakers.

In May of their last year of high school, they were invited to play their first show in Tokyo at an event hosted by THE SNEEZE. THE SNEEZE were a little scary-looking at first, but took great care of the girls and showed them an awesome time. (Thanks, guys!)

The month after that, the girls hosted their first event, “Never Forget Kindness” at Takatsuki Raspberry. They invited Lovers and Covers and The Adam’s Apples & Bob to play with them. In August, they travelled to Tokyo again to play at Adam’s Apples & Bob’s event at Shinjuku Marble, after which they took several months off to focus on their studies. (Yeah, they were still in high school.)

In 2015, they went back to rocking out and were invited to open the final show of The Adam’s Apples & Bob’s tour, once again at Tokyo’s Shinjuku Marble. Then in April, they opened for The 50 Kaitenz and Yellow Studs at Varit.

Miracle after miracle… the girls were tapped to open for The 50 Kaitenz at their event “Rock ‘n Roll Generation” at Tokyo’s Shimokitazawa Shelter, playing with (natch) The 50 Kaitenz and Tekumaku Mayans. (Unfortunately, they were so nervous that they barely remember the show itself…)

In August of 2015, they released their first mini-album, which was put on sale in limited release at Tower Records stores, which prompted them to set out on a (not quite) country-wide tour. They met tons of wonderful people everywhere they went, and wrapped things up with a huge and amazing show featuring Wasurete Models, The Dakishimerus, Slimcat, and Tomita Kotono (formerly of The Adam’s Apples & Bob).

The Tomboys was born!

After recovering from the minor identity crisis, the four girls comprising the newly-christened Tomboys made their way to London to record with producer Glen Matlock (former member of the Sex Pistols!!)

While in London, The Tomboys played their first show abroad, sharing a bill with Glen Matlock himself!

By any measure, this is a resounding success! The girls are ecstatic at their newfound popularity!

The recording they did in London was pressed to shiny plastic and released by Village Vanguard this August, and they are now touring across Japan to support the album!

Who knows what other amazing things are in store for our heroes?! Well… while they’re waiting to find out, The Tomboys are going to keep on rocking… leaving a trail of happy faces and blown minds in their wake!